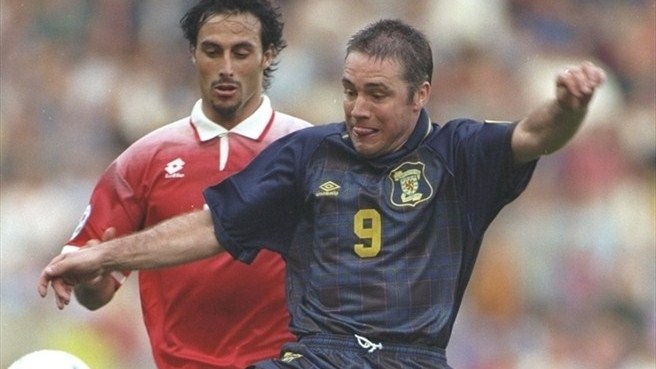 Having failed to score in their previous two Group A matches, a 0-0 draw with Holland and a 2-0 defeat to England, Scotland broke their duck at EURO 96 with a strike that would rank among the goals of the tournament.

It was Ally McCoist who initially won the header on June 18 1996 at Villa Park in Birmingham, nodding it down for Gary McAllister, who took a touch and turned towards the Swiss goal as McCoist hared past him, screaming for the ball.

The Leeds midfielder cushioned his pass, delicately rolling it into McCoist’s path. A nation rose to their feet, willing the Rangers striker to hit it first time. No one, for a second, anticipated as sweet a finish as McCoist, the very definition of a penalty box striker, rifled the ball home from nearly 40 yards out.

And for a second, we all dared to dream.

This goal – and a win in this final group match would, against all odds, take Scotland through to the next round of the 1996 UEFA European Championships. We had drawn with the Dutch in our first game, had our hearts broken against Gazza and the English, but now a Swiss roll would provide the sweetest of desserts.

Ultimately, within the hour, that dream had soured.

No one had given Scotland a chance going into the EUROs in 1996. We were an experienced but functional squad, one lacking an exceptional, world-class talent who very often is the difference in games at this level.

We had travelled south to England with five strikers, but goals were always going to be the issue. We had seasoned, respected performers. Gordon Durie was at Rangers after a lengthy and fruitful career with Chelsea and Tottenham Hotspur while Kevin Gallacher had won the English Premier League with Blackburn Rovers a year earlier. The former was 30 years old while the latter was 29.

The two younger frontmen in the squad were John Spencer of Chelsea and Scott Booth, who was at Aberdeen but a year later would seal the most surprising of transfers to Borussia Dortmund. Spencer was 25 at the time but only had nine caps for Scotland and was not a starter at Stamford Bridge. Booth, at 24, was playing regularly for Aberdeen.

However, none of the four were proven, consistent goal-scorers at the highest level and, even at the ripe old age of 33, this was exactly what McCoist offered. This was why Scotland manager Craig Brown made the decision to start him in the final group match against the Swiss.

‘Super Ally’ had a record for delivering. He was Rangers' all-time leading scorer, with 355 in under 600 appearances during a fifteen-year spell at the club between 1983 and 1998. He delivered when his team needed him, notably in the European Cup Battle of Britain against Leeds United. And, as Rangers bought big and brought in world-class performers during their nine-in-a-row run, McCoist upped his game, becoming the first Scot to win a European Golden Boot in the double-winning, 1991-92 season.

His record for Scotland was respectable as well and McCoist would eventually score 19 in a total of 61 appearances in Dark Blue.

Many were close range finishes and the sight of McCoist wheeling away in celebration with the broadest of grins, six yards out or having just rounded the keeper was a familiar one. But he had also shown an eye for the spectacular, like in the 1993 Skol Cup Final where he came back from a broken leg and off the bench to win the cup with an overhead kick.

In 1996, against a talented Swiss team, which included a future Champions League winner in Stephane Henchoz and the brilliant Dortmund striker, Stephane Chapuisat, McCoist again produced the goods. His thumping long-range strike in to the top corner sealed the win Scotland needed.  It was a thing of beauty. A moment of brilliance, every bit as unexpected as it was spectacular. There was, however, a caveat, a disclaimer scrawled in the small print. Holland, who had beaten Switzerland 2-0 in their penultimate group match, needed just one single strike in their game against England to finish above Scotland on goals scored. There were 12 minutes remaining in the match at Wembley and England were 4-0 in front and cruising when Patrick Kluivert broke into the box and rolled his shot beyond David Seaman from the tightest of angles.

The game finished 4-1 and that was it for Scotland: Game over. Our EURO adventure dead and buried. And in the most desperate and miserable of fashions.

There are, however, lessons to be learned from our last appearance in the EUROs, as well as reasons to believe. Time and again, Scotland have shown glimpses of brilliance in tournaments.

Perhaps this year, as we return to this grand stage for the first time since EURO 96 and again dare to dream, another hero will step up with a wonder strike? All we need is a touch of good fortune to go with it.